Target Pistol Shooting, as a sport, is as old as pistols themselves - some 500 years old in fact. The sport started in Europe, as a necessary adjunct to the use of the pistol in war.  When not involved in fighting, pistoleers would practice constantly with their weapons to attain speed and accuracy - necessary qualities when fighting.

At some stage, some bright (or bored) spark had the idea of challenging another to a test of marksmanship for a prize, probably of money, and they indulged in a competition to see who could achieve a shot nearest to a selected mark, and so target pistol shooting, as a sport, had its first beginnings.

By the late 19th century, the concept of excellence in marksmanship for its own sake became established as a sporting ideal and contests were held to determine the best marksman in a town, city, county or country. The prizes for the winners of these competitions had become trophies or medallions, but the real prize was the widespread prestige that was bestowed on the winners of these contests.

It is hardly surprising that Europe took the lead in the development of the marksmanship sports into an art form. Even today, in almost every country in Europe,  shooting contests with pistols, rifles and shotguns are highly regarded sports which attract a huge following.

The type of shooting events conducted at the Olympic and Commonwealth Games are now referred to as the ISSF target pistol sports. At the Olympics, the following pistol events are conducted:

At the Commonwealth Games, the Olympic matches are conducted as well as the following two matches:

A True and Gentle Sport

There has been so much adverse publicity and so much disinformation about target pistol shooting, that the average Canadian is likely to view the sport as being highly dangerous and practised by people who are a major threat to community safety. The reality is the exact opposite of this.

This article is about International Target Pistol Shooting of the type conducted at the Olympic and Commonwealth Games. This is a very “purist” form of target shooting, very refined, very demanding and concerned only with absolute precision. It is controlled by the International Shooting Sports Federation (ISSF), the International body based in Switzerland. The facts and opinions contained herein apply to this type of shooting only, as the author is not qualified to comment on other branches of the sport. However it is understood that things are pretty much the same for other branches of the pistol sports.

Firstly, to dispel some of the myths and mistruths about this sport.

Fact: From the time that target pistol shooting first started in Canada, there has not been a single case of a person being injured or killed as a result of owning or using a target pistol. Almost every other sport played or practised in Canada, however, has had its share of deaths and injuries caused by participation in that sport.

Myth 2: Target Pistol shooters are dangerous people who only practice the sport to become good at killing.

Fact:A typical piece of anti-gun propaganda. No ISSF target pistol shooter has ever committed a crime of any sort using his/her pistols. ISSF pistol shooters are amongst the most stable, most balanced and most disciplined sports people in Canada. Pistol shooters are interested in this sport in the same way golfers are interested in theirs. Anti-gun/Gun Control organizations will be disappointed to learn that pistol clubs are not training establishments for Murder Incorporated.

Myth 3: It is too easy to get hold of a pistol.

Fact: Getting a pistol licence and subsequently obtaining a pistol of any sort, legally, is a lengthy process, involving a detailed investigation, by the Police, of the person concerned, his/her background, and their suitability as a fit and proper person to own and use a concealable firearm. Anyone who thinks this is a quick and easy process is invited to try it for themselves. Getting hold of an illegal pistol on the black market is another matter entirely and has nothing to do with legal pistol shooters or the sport.

Myth 4: Pistols are designed solely to kill people and are more dangerous than rifles and shotguns

This is an example of an Olympic target pistol:

This is a pistol designed for other shooting activities:

At the Olympic level, there are five pistol disciplines. They are the Men’s 50 Metre Pistol Match (Free Pistol), Men’s 25 Metre Rapid Fire, Men’s 10 Metre Air Pistol, Women’s 10 Metre Air Pistol and Women’s 25 Metre Sports Pistol. At Commonwealth Games and World Cup/World Championships, the additional disciplines of 25 Metre Centre Fire and 25 Metre Standard Pistol are included. The pistols used range from: .177 calibre single shot air pistols,  .22 calibre single shot match pistols, through to 5 shot semi-automatics, in .22 calibre and 5 shot semi-automatics and revolvers in .32 or .38 calibre. These are all specialist target pistols designed to meet the demands of the particular matches for which they are used.

It is important, too,  for people to understand that the targets used by ISSF pistol shooters are round bullseye targets, which are divided, usually, into 10 scoring rings. No man-shaped targets are used.

The matches shot by ISSF shooters cover a range of shooting skills varying from the demanding precision of the 50 Metre Pistol Match, which is shot with a highly refined, single shot, .22 calibre match pistol, through to the excitement and fast pace of the 25 Metre Olympic Rapid Fire Match, which combines precision with fast shooting in very short time limits on a bank of five targets.

The montage shows the type of pistols and the various targets used in this sport: 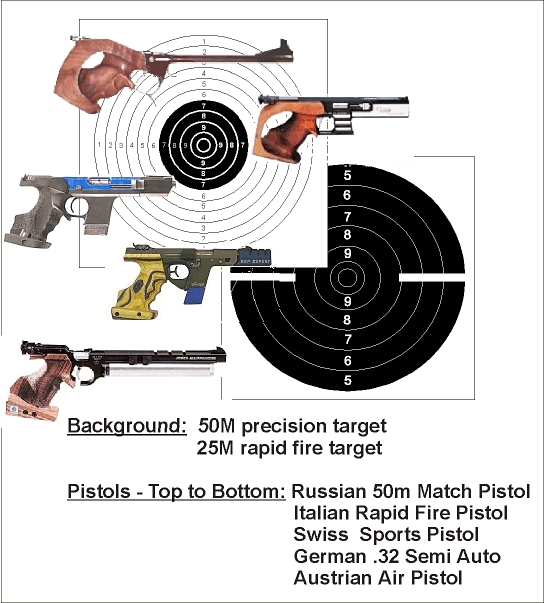 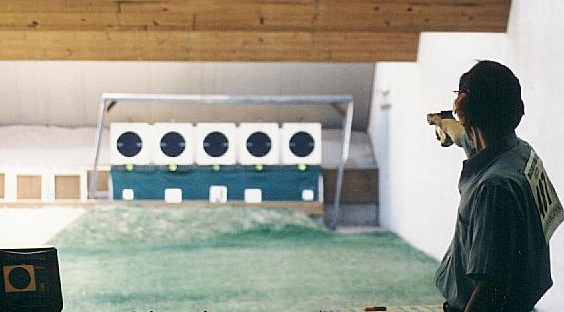 ISSF target shooting appeals to those people who enjoy the challenge of a difficult yet rewarding sport which demands great self-control and concentration in the pursuit of precision for its own sake. The sport attracts people from a broad spectrum of the community, including doctors, teachers, lawyers, QCs, accountants, politicians, business owners, tradespeople, police, soldiers, clerks, shop assistants and housepeople. It is a particularly appealing sport for women who quickly learn that they can compete on equal terms with men and win.

ISSF pistol shooting also has great appeal for those people who suffer from a wide range of disabilities including those who are wheelchair bound, and amputees. There is virtually no upper age limit for the sport and many elderly shooters are still capable of winning trophies at high level competitions Canada wide. There is no discrimination of any kind in this sport, except that relating to mental stability and criminality. Newcomers learn basic techniques and safety from the first moment they come to a club. ISSF pistol club safety records attest to the effectiveness of this training. Our coaches are highly experienced shooters who can lead a newcomer from the beginner stages of the sport right through to Olympic level. Our more experienced shooters expend thousands of rounds of ammunition to maintain and improve their performance. 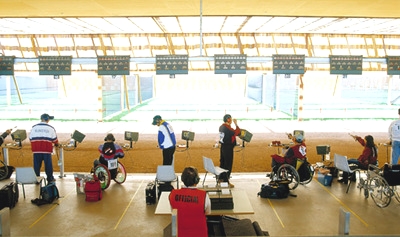 The best way for people to learn about the sport, is to visit one of the pistol clubs in their local area.  The Clubs have nothing to hide and visitors are made most welcome. Providing a visitor is of good character and has no criminal convictions or mental health problems, they will be able to try their hand at the sport, under club supervision. 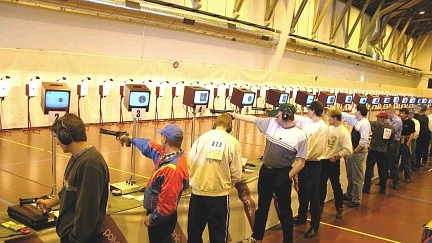